We were lucky to spend the whole day at Legoland today. We try and go every year and each time we go we seem to have more fun!

As soon as we got into the park we took the Hill Train down to Traffic. The first ride we went on was the Boating School as the queue was relatively short. There were tables of Lego to play with whilst you waited which I thought was a great touch. Then we headed off to Adventure Land where we took a ride on the Atlantis Submarine Voyage which was fun if a little stuffy. After our ride we were able to look at the fish in the tanks and the children could climb under and into the fish tanks to get a really great view of the fish.

We walked over to Lego City and took a ride on the Orient Expedition. Both the children loved this ride and enjoyed looking out for the Lego animals. By this time it was getting really hot so we decided to sit down and eat our picnic. Fortunately it was nearly time for the Pirates Of Skeleton Bay Stunt Show. We sat down under the shade of some trees, ate our picnic and enjoyed the show. This was the first time both children had sat down and watched something like this and they seemed to really enjoy it, especially Big Brother who was eager to cheer on the good pirates and boo the bad ones!

After the show we walked back through the park and went on a few more rides. 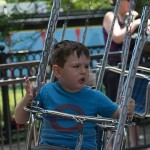 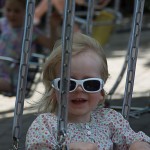 Then we walked to Duplo Valley which we always enjoy. We had packed some spare clothes and a towel as they have a fantastic splash park called Splash Safari and it was the perfect day for it. Big Brother took a while before he realised he could run around and get wet and it was fine and fun. Then I couldn’t get him out of there he was having such a good time and playing with the other children. There were Lego Duplo animals to sit on, buttons to press and fountains to run in and out of. Unfortunately Little Sis didn’t want to even dip her toes in the water. Daddy took her on the Duplo Train and she seemed to happy to sit in the shade for a while. Then, after a quick clothes change, we watched a puppet show at the Duplo Theatre, too another boat ride through Fairy Tale Brook.

By this point we were beginning to feel hot and tired so we headed over to Miniland to look at the 40 million pieces which have been used to recreate scenes from the USA and Europe, all with sounds, traffic, trains and boats. The children had enough energy to chase the trains before we caught the Hill Train back to the top.

We had a lovely day out and went on all the rides we wanted to. Daddy treated the children to some new toys from the shop too!

2 thoughts on “A day at Legoland!”

This website uses cookies to improve your experience while you navigate through the website. Out of these, the cookies that are categorized as necessary are stored on your browser as they are essential for the working of basic functionalities of the website. We also use third-party cookies that help us analyze and understand how you use this website. These cookies will be stored in your browser only with your consent. You also have the option to opt-out of these cookies. But opting out of some of these cookies may affect your browsing experience.
Necessary Always Enabled

Any cookies that may not be particularly necessary for the website to function and is used specifically to collect user personal data via analytics, ads, other embedded contents are termed as non-necessary cookies. It is mandatory to procure user consent prior to running these cookies on your website.