Today we were invited to the Millennium Mayfair Hotel in the West End for afternoon tea with the stars of The Furchester Hotel. The weather was beautiful so first we enjoyed a walk in Green Park and admired the daffodils before heading to the hotel. 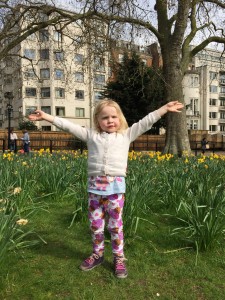 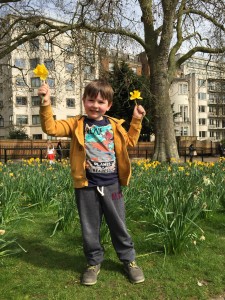 The Furchester Hotel made its debut on CBeebies in September and was the number one rated new children’s show last autumn.  Aimed at 3 to 6 year-olds the show follows a close-knit family of cheerful Muppet monsters who own and operate an ‘almost’ world-class hotel. The children were very excited as they really enjoy The Furchester Hotel. We watched a new episode (which will be on CBeebies in May) before the stars of the show came to meet us.

The Furchester Hotel has recently launched an adorable new toy range from HASBRO aimed at 12 months and upwards including 9’,11’ and 20’ inch plush characters and a single figure assortment. We then enjoyed a delicious afternoon tea of sandwiches and cakes before heading home. The children were very kindly given a Cookie Monster and Sophie to bring home to live with us too.